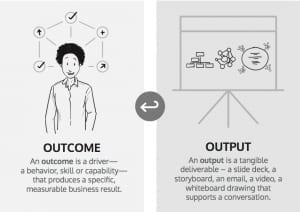 In many work situations, random things are created because people are not focused on a specific outcome. They do things, launch programs, take actions, but they have no business outcome in mind.

The problem usually occurs, because people don’t understand the difference between an outcome and an output. There is a BIG difference between the two. In our work with clients, we have found that these two ideas are often misunderstood. The “stuff” people create does not, in itself, constitute an outcome for the business. Every email, meeting, presentation, or experience that they create is just one thing by itself. It’s an output. But if they know what outcome they are trying to achieve, then all of the outputs become vehicles to drive the desired outcome.

Outcomes keep everyone focused on what’s most important for an organization and provide a way to measure whether they’ve achieved a desired result. Put another way: if you can’t connect your work and your outputs to a measurable result and outcome, then you shouldn’t be doing it at all.

An outcome-based mindset leads people to focus on results first, and outputs or actions second. When they identify the desired business result(s) first, they can then identify the tasks necessary to achieve them. For example, a salesperson for a large technology business, who is accustomed to orchestrating deals with a Chief Information Officer (CIO), would head into the first call thinking about how to have a conversation about the CIO’s role, challenges, and pressures she is facing, so that she finds value in the conversation and agrees to another meeting to explore how his company can help her. To be prepared for that outcome which will then lead to the larger outcome of making a sale, the salesperson has to be conversant in the CIO’s business. He’ll have to do some planning to learn about what other opportunities or contracts are already in play between the two entities. He’ll need to research where some of her challenges might be coming from, by reading annual reports. Some of those steps may lead to outputs — a discussion document or a whiteboard, for example.

But the outcome — agree to another meeting, to move a potential opportunity forward, to reach a shared vision of how his solutions can address her problems, is always what that salesperson has in mind. Focus on the wrong thing—such as selling her something she doesn’t need or spending too much time talking about his company or products—and she’ll become annoyed and feel like her time is being wasted. The outcome then becomes unreachable. When people are outcome-based, they always have the bigger picture in mind. Always. They make decisions about outputs and tasks based on whether or not they move them forward toward the outcome.

Thinking in an outcome-based way can be an individual mindset, but it also can be a group mindset. It can even be an organizational or functional mindset. We believe strongly that having an outcome-based mindset is what makes all the difference in the work we do with our clients. The specific, measurable outcome becomes the north star that always helps us navigate.

It’s arguable that there are many types of outcomes in business. The salesperson example shows outcome-based thinking for a single large deal.

And while a single large deal is great for that salesperson, there’s nothing radical about such an isolated example. By itself it doesn’t produce a major business impact. But what if someone could help 50 salespeople learn how to think and plan the way he did with the CIO? And 50 salespeople started closing large deals, repeatedly and consistently, because they knew how to have valuable conversations with their customers? Or 500 salespeople?

Here are the basic criteria that differentiate a Radical Outcome from something that is just run of the mill.

Executive Level, Cross Functional Stakeholders are involved. To drive change in the business where the impact is truly felt by customers, executive sponsorship is needed, usually because there will be so many different groups involved in working toward the outcome that it requires someone at the executive or business unit level of an organization to provide the endorsement of the initiative.

Results are achieved over time. Every executive wants change to happen “yesterday,” yet even so, it takes time for an organization to adapt and change, especially when the change itself is radical. Urgency defines the need for these changes, even ones that seem impossible to make. Most executives therefore expect to see roadmaps or plans that show how a change will take place, and they also expect to see consistent progress toward the outcome.

Results must be measurable and tied to the outcome. One of the most difficult things we’ve seen when clients are facing Radical Outcomes is determining what to measure so that progress can be conveyed against the outcome. Knowing that a change won’t happen overnight is one important guideline. Knowing what to measure and in what time frame are two additional guidelines.

The good thing about setting these guidelines? You can show the impact of what you have created. You can also more readily and accurately identify gaps and make the changes needed, quickly, in an agile manner, to meet the business outcome.
Radical outcomes actually make common sense and are comprised of tangible results. They’re the product of scope and scale, and something the executive level group is constantly envisioning. Imagine what would happen within your organization if you started having conversations about Radical Outcomes instead of just creating more stuff.

Juliana Stancampiano, author of RADICAL OUTCOMES: How To Create Extraordinary Teams That Get Tangible Results is an entrepreneur and the CEO of Oxygen. For more than fifteen years, she has worked with Fortune 500 companies, both in them and for them. Her firm’s clients include Microsoft, DXC, Delta Dental (of WA), Starbucks, F5 Networks, Avaya, and Western Digital, among others. Her in-depth experience, along with the research that Oxygen conducts and the articles she has published, has helped to shape the perspective that Oxygen embraces. To learn more, visit: www.oxygenexp.com.