Tag Archive for: how to win friends and influence people 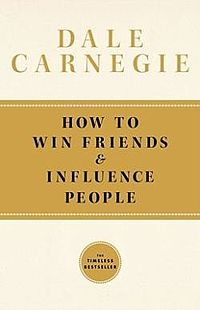 by Dale Carnegie is the timeless classic that reveals how leaders can engage and motivate individuals to become teams; joining together to achieve a common purpose and produce more than the sum of their singular efforts. This book unveils:

StrategyDriven Contributors like How to Win Friends and Influence People because is provides the reader with easily understood and actionable methods of influencing people without being manipulative; engaging and motivating them to achieve more together than they could as individuals.

StrategyDriven Contributors believe that while leaders naturally act to serve and promote their self interests, it is equally important to benefit those who are supporting those initiatives. Dale Carnegie’s prescription for advancing one’s agenda is a benevolent, win-win approach that influences instead of manipulates. His ‘honorable’ approach to winning people’s support makes How to Win Friends and Influence People a StrategyDriven recommended read.