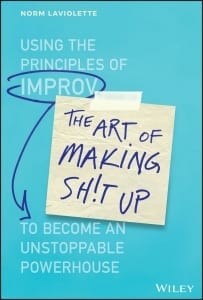 Turning fresh ideas into full-blown, marketable commodities is the mandate of every innovation team. The endeavor is more than serendipity. A great part is honed skill.

While originality and innovation spring from deep in the recesses of the mind, it’s our job to develop a creation mindset. This requires strengthening that mental muscle that allows new ideas to arise and exciting refinements to emerge. Part of this exercise is overcoming the self-judgment, criticism and lack of confidence that all contribute to our ability or lack thereof to think quickly or creatively.

I take my inventiveness cues from improvisational comedy. I’ve performed in, directed and produced improv comedy shows for more than 20 years. In improv, the actors make up scenes and stories from nothing. They build off of each other’s ideas without worrying about what the entire scene is going to look like. They just focus on the small, in-the-moment decisions.

As in improv, refining our ability to heighten inspiration and add our own creativity and imagination to an initial idea will let us take ideas to unexpected and exciting places.

Generally speaking, ideas don’t hit like a lightening bolt. Nor do they spring up fully formed, packaged and ready to market. The trick is to recognize the spark when our mental radar identifies a blip of inspiration, and then decide to act on it.

How do we go about finding the spark? Here are some ways that consistently help me set fire to new and interesting ideas:

1. Curiosity. Allowing ourselves to pursue interests for no reason other than the fact that something intrigues us is reason enough to explore new subjects. When you allow your curiosity to explore new concepts, you create new data points in your brain. What we’re doing is filling our “subconscious thought well” with snippets of ideas that our brains can reference. Ideas don’t come out of nowhere — they come out of that subconscious thought well. The more curious we are, the more and different pieces of information we make available to draw from.

2. Go do stuff. Moving from a passive role to an active roll activates the entirety of our bodies and ingrains whatever we’re doing more deeply. Like flowers? Then actually plant and grow some. Interested in history? Take a guided tour of an historic site. The point is, when we actually go out and physically experience whatever we’re most interested in, it becomes a part of us that can never be if we’re just watching. Having pursued a broad assortment of experiences gives us a greater capacity for making associations from a piece of information. Like improv actors, we’re able to build upon ideas by making connections or finding possibilities in all kinds of unexpected places.

3. Observe. Different from spectating, observing is a purposeful activity where we’re consciously focusing on what we see, hear and feel. When we observe, we tend to see both the micro and macro aspects. We take in the entire scene in the macro, yet pick out specific details in the micro. Observing is important to the creative process because we’re again taking in new information and building that subconscious database. This new information allows potentially unrelated concepts to collide to allow something new to happen.

4. Ignite sparks. Every day, people come across sparks of inspiration. An idea comes to mind and a small flash of excitement courses through us as we say to ourselves, “Hey, that’s a pretty good idea.” But most of us never do a thing about it and the spark dies out. The ability to jump on the spark is the single most important way of putting innovative ideas in motion. When we have a positive emotional reaction to an idea, it means there’s something there to take a look at. It may just mean starting to research it online. Some sparks will die a natural death, and that’s okay. What we’re doing is strengthening that muscle that allows us to make connections and let things spontaneously combust.

5. Fan the flame. Following inspirations even to their next iteration creates a momentum that can eventually allow a spark to flicker to life. One hundred sparks may die out for every one that builds into a flame, but when excitement for an idea doesn’t die and continues to energize us, we need to jump on it and see where it goes. From following an idea to its next logical step, one decision leads to the next. As the flame of the idea continues to build, we reach the point where we’ve envisioned something worth creating.

By following our curiosity, which leads us to do stuff, and observing what’s happening around us, we’ll start to experience the feeling of inspiration. And by fanning those sparks of inspiration that continue to excite us, we’re more likely to land on ideas worth pursuing.

Norm Laviolette is the co-founder and CEO of Improv Asylum, IA Innovation and Asylum Gaming and Esports (AGE). He has performed, directed or produced more than 10,000 improvisational comedy shows on three continents. He brings the experience of building companies from the ground up into multi-million dollar businesses. Norm Laviolette has worked with Fortune 500 companies, including Google, Red Bull, Fidelity and more. His new book, The Art of Making Sh!t Up: How to Work Together to Become an Unstoppable Powerhouse (Wiley, May 7, 2019), describes how the techniques of improv can transform teams into more powerful, creative and healthy organizations. Learn more at iainnovation.com.