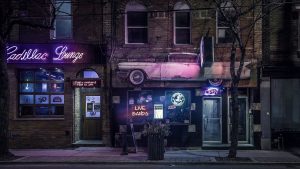 From large outdoor interactive screens on buildings to tiny displays in a wristwatch, the display industry has created applications and entire industries over the past 60 years, transforming our entire society. Just take a look at laptops, tablets, mobile phones, and other handheld devices, which were all possible thanks to display technology innovation.

Older TV’s took half the space in your room; now they are like a painting on the wall, and in some cases thinner than a portrait frame. Modern displays are everywhere now – from the back of the seat in an airplane and taxicab, to stadiums and other public venues, tiny kiosks that serve one person at a time, and of course, medical devices, military vehicles, and more. Display innovation can also be found in factory equipment, oil rigs, trains, trucks and boats and airplanes. Other unique display applications include displays embedded in a credit card.

Innovators in this industry are displacing shelf labels in stores, printed signs, and printed timetables at bus stops and train stations.

It has been thrilling to be part of this industry the past 25 years. Right out of engineering school, I worked on vacuum tubes – CRTs ruled then – and later on, monochrome LCD. I got my real start with displays at Standish Industries in Wisconsin, which was a pioneer in wide temperature monochrome TN (twisted nematic)) and STN (super-twisted nematic) LCDs, which was used in a variety of rugged applications.

It was exciting to work on rugged displays that provided valuable information that made them indispensable – from gas pumps to ATMs, parking meters, aircraft displays, and John Deere tractor consoles. Later I was fortunate to work on TFEL displays while at Planar; on early AMLCD while at TFS; best in class AMLCD while at Sharp; on electrophoretic ePaper while at E Ink; and presently, I get to work on every major cutting edge display technology.

One thing I find fascinating about this industry is that you can’t write off any display technology when something new enters the market. Some of these technologies linger on for much longer than you expect; some should have been out of the industry 20 years ago, but they are not – they find niche applications and continue to make a living for someone.

In honor of the Society for Information Display’s (SID) 60th anniversary, I’d like to take a look at some of the display technologies and their impact over the past six decades:

Speaking of the future, I’d like to now dive into some of the display innovation trends I see by the year 2035:

It’s thrilling to think about my younger industry colleagues who will pioneer the next 60 years of display technologies. Devices will continue to be smaller, smarter, and versatile. From phones to cars to AI devices, display technology will enhance how we live, work and play. I expect the industry to build displays that will exceed the expectations set by every futuristic display we have seen in any sci-fi movie thus far.

Every time we reach what we think is the limit on what a display technology can do, along comes an industry colleague with a new chemical formulation, or the ability to bend some light or stretch some laws of physics to keep it going. It’s been a fantastic ride. I can’t wait for more.

Sri Peruvemba is CEO of Marketer International Inc. in California. He has also served on the Executive Board and was former Chair of Marketing for many years for the Society for Information Display (SID’s Display Week 2022 will be held in San Jose, CA, May 8-13, 2022). With over 30 years of experience in the technology industry, Peruvemba has been an influential advocate in the advancement of electronic hardware technologies. He is an acknowledged expert on sensors, electronic displays, haptics, touch screens, electronic materials and related technologies; and consults, writes, and presents on those subjects globally. Contact Mr. Peruvemba at [email protected].