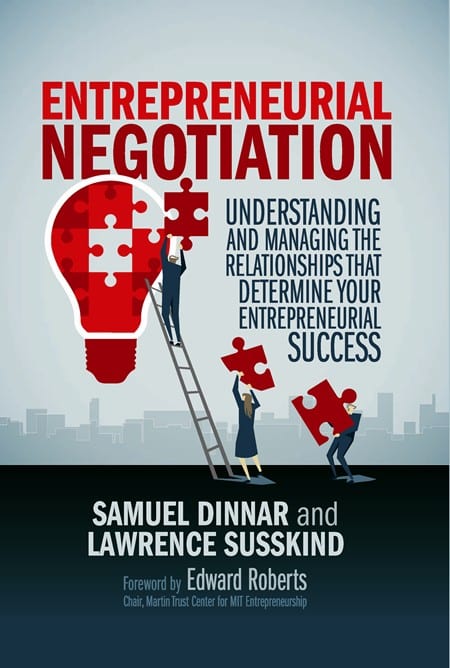 According to our research, the single biggest threat to entrepreneurial success is an inability to handle the negotiations that arise at key interactions in the evolution of a start-up. Founders must be able to prevent, detect, and respond to potential negotiation mistakes in each part of their galaxy.

But often the very qualities that help entrepreneurs launch businesses – willingness to take risks, high levels of self-confidence, a desire for rapid results – can, in themselves, become stumbling blocks. Based on interviews and research we’ve done for our book, Entrepreneurial Negotiation, we have pinpointed the most common negotiation mistakes that founders make. One of the most insidious occurs when entrepreneurs are too self-centered or maintain a limited perspective. Failing to recognize the needs and priorities of those with whom they are negotiating, can mean that no deal will be reached.

Here’s a simple solution: entrepreneurs should not prepare alone or negotiate alone. Research proves that team negotiations create about 25% more value on average than solo negotiations. That’s because a team is better able to take in more about the other side’s interests, achieving an increased level of information exchange, and finding more mutually beneficial trades.

Therefore, you should bring at least one trusted colleague with you during any negotiation. Plan to talk with your colleague during breaks and between sessions to help you confirm your understandings. Based on that person’s expertise, you may also empower him or her to pass you notes, call for a break, or join the conversation if he or she sees something of significance that you are missing. Just like the aviation industry has learned to improve air safety significantly by giving copilots permission to speak up, you may significantly improve your ability to detect and prevent mistakes by employing other “cockpit resource management” capabilities within your negotiation team.

Here’s another reason you should not negotiate alone. Options, timetables, costs, BATNA’s (Best Alternative to a Negotiated Agreement) and so on, generally do not remain stable during negotiations, especially between sessions. Some of the information or ideas that the other side presents may mean something different to you when seen from a new vantage point. Discussing this with your colleague is important. Also, if there is a move that you suspect may provoke the other side, or may put you in a position that would be close to making a mistake – step away from the table. Initiate a consultation with your colleague, or contact another expert for advice.

Brainstorming To Get Unstuck

We’ve also learned that when entrepreneurs have a narrow perspective, they generally miss out on opportunities to create value. Entrepreneurs who make the mistake of haggling suffer from exactly this narrow mindset. When detecting that you are focused on one primary item, or that you have started a tug of war on a single issue – try to switch into a problem-solving mode and look for possible trades that will create value.

To this end, we suggest using brainstorming to come up with more options. We recommend using two simple ground rules: offer no judgments on the quality of what is being proposed (during brainstorming) and don’t worry about attribution. No judgment means that when one person proposes an idea, no one should judge it as good or bad at that moment. (In the world of theater improvisations this is known as the “Yes, and …” response.) Remember that a partial idea, a bad idea, or an absurd idea might serve as a bridge to a better idea if someone doesn’t shoot it down immediately. “No attribution” means that an idea should not be immediately attributed to the person who suggested it. Better that no one feels “ownership” at the outset. This way, the actual originator doesn’t have to defend their proposal (which could cause them to stop listening to other ideas).

After generating as many options as possible, consider each one as part of an overall package. To reach agreement, you will need to find a package that is acceptable to both sides. Each party may not like every- thing in the package, but the deal as a whole needs to be better for each than doing nothing.

Teamwork and brainstorming are two important methods that entrepreneurs can use to improve the outcomes of their negotiations. Applying these practices will help insure the long-term viability of your organization.

Samuel Dinnar, co-author of Entrepreneurial Negotiation, is an instructor at the Program on Negotiation at Harvard Law School in Cambridge, Massachusetts. As founder and President of Meedance, he provides global consulting services and serves as a mediator specializing in business conflicts that involve founders, executives, investors, and board members. To learn more, visit: www.EntrepreneurialNegotiation.com or www.meedance.com.

Taking Your Business Forward: The Best Practices To Follow
Scroll to top