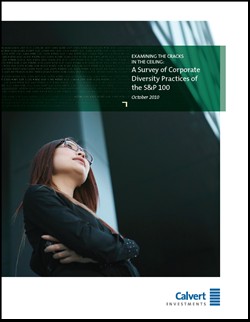 Women may make up more than half the workforce1 but continue to be significantly underrepresented on corporate boards and in C-level executive positions, according to a major new study released today by Calvert Investments, a long-time leader in advocating for corporate diversity.

Examining the Cracks in the Ceiling: A Survey of Corporate Diversity Practices of the S&P 100 shows that out of the 100 CEOs represented in the survey, 92 were Caucasian males. Women make up approximately 18% of director positions within the S&P 100, and only 8.4% of the highest paid executive positions within the same group of companies.

Four Key Findings From the Report

As an investor, Calvert recognizes that those companies that combine competitive financial performance with fair and equitable working environments where diversity is not only tolerated but embraced are likely to recognize gains in both the workplace and marketplace and be better positioned to generate long-term value for their shareholders.

“We are very concerned about the fact that women and minorities continue to be under-represented at the highest levels of management,” said Barbara J. Krumsiek, President & CEO of Calvert Group, Ltd. “Without a pipeline of female and minority executives in highly-paid, highly responsible positions, it will be very difficult to achieve board diversity, which is critical to strong governance and good management.”

The study showed that companies of this size have a significant commitment to diversity. None of the companies scored zero, and 65 out of 100 companies scored at or above 70 points. Moreover, a few of the companies emerged as genuine leaders in the diversity movement, setting an example that other companies could emulate. Among the top-scoring companies were Chevron Corp., Citigroup Inc., Coca-Cola Co., JPMorgan Chase & Co. and Sara Lee Corp.

Still, the study also demonstrated how difficult it remains to measure progress, given major gaps in disclosure.

“We are concerned about the lack of disclosure, because data is critical to demonstrating progress in female and minority representation,” said Aditi Mohapatra, lead author of the report and analyst specializing in diversity issues in the Sustainability Research Department of Calvert Asset Management Company, Inc. “It is also important in evaluating the effectiveness of diversity initiatives. With better data, we could more readily compare the impact of various programs – such as dedicated management training for women and minorities, diverse employee resource groups, and recruitment and outreach initiatives – and recommend best practices.”

Calvert released the first edition of Examining the Cracks in the Ceiling in September 2008. That edition analyzed the corporate diversity practices of the companies held in the Calvert Social Index®. The 2008 report found that while nine companies within the survey showed no public commitment to diversity, only 3 percent demonstrated diversity excellence.

Calvert has long been a leader in advocating for corporate diversity. In 2004, the Calvert Women’s Principles® became the first global code of corporate conduct focused exclusively on empowering, advancing and investing in women. In 2008, Calvert partnered with the City of San Francisco’s Department on the Status of Women and Verité to adapt the Principles for the Bay area and launched the Gender Equality Principles (GEP) Initiative. Last week, the three partners officially launched the companion website and self assessment tool available at www.GenderPrinciples.org. This launch was the culmination of a series of roundtables over two years which brought together companies and issue experts to translate the Gender Equality Principles into practical policies, tools, and indicators for direct implementation into the workplace. 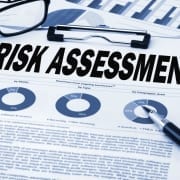 Stay Secure: How to Do an IT Risk Assessment 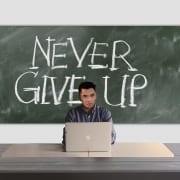 Which Qualities Define a Successful Entrepreneur?

The Secret of Lousy Service and How to Fix It 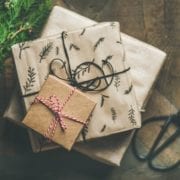 How Can You Keep Your Talent In-House?