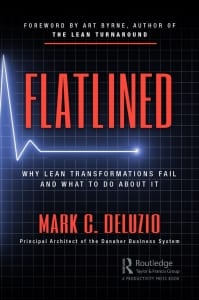 It seems as if every organization today is looking to “get lean.” I’ve visited hundreds of companies that claim they’re transforming their business with Lean methodologies. They’ve rolled out fanfare that—to the untrained eye—gives the impression that these transformations are rooted in rigor and discipline. Signboards, banners, Gemba boards, and tape on the floor all proclaim, “We’re taking this seriously.”

But as you become more experienced with Lean, you realize that what you can’t see is what separates world-class operations from mediocre ones. As a Toyota executive once said when asked why the auto giant allows competitors into its factories: “What they need to know, they cannot see.”

A $13 billion global organization had been “doing” Lean for close to a decade, and the plant I was visiting was considered to be one of its best. They asked me to review their Lean progress, so I spent a day listening to the story of their Lean journey and touring the facility.

My review started with a presentation of their progress to date. The management team ran through a myriad of metrics that had convinced the corporate office they had made real progress. In reality, their “progress” masked many dysfunctional Lean behaviors:

Excess inventory. The plant’s management boasted that inventory turns had increased from 6.5x to 18x. Upon further review, this increase in inventory “performance” was due to the fact that 70% of their raw material inventory was on consignment, and they didn’t include this in their calculation.

Regardless of whose books carry your inventory, the same ills of excess inventory exist. The consigned inventory encouraged the company to hold more inventory than it otherwise would have—had the inventory been purchased and valued on its corporate balance sheet. To make matters worse, the company had expanded its raw materials warehouse to accommodate the inventory increase.

Missing per-hour metrics. Management then explained that their sales-per-employee productivity metric increased from $280,000 to $360,000. They touted a renewed focus on standardized work, which accounted for most of this improvement. As I probed further, I learned that the company laid off 30% of its workforce in the previous year, and the plant’s overtime hours increased from 5% to 35% during this time period. Had they calculated their productivity based on hours worked, the improvement would have been negligible.

I explained that a promise date is meaningless to the customer. Instead, they should switch their calculation to the customer request date. They indicated they had attempted to calculate it this way, but when using this method, on-time delivery performance dropped to 35%.

When I toured the plant, the first thing I noticed was that the facility was spotless. It was well lit, and you could have eaten off the painted floors. Many assembly cells were in place, and they appeared orderly and organized. When I joined their morning Gemba walk to review the facility and the previous day’s performance, I noticed the following:

Missing targets. We first stopped at their Gemba board, which contained all of the plant’s operating metrics and value stream information. Many of the metrics were missing goals or targets, so it was difficult to gauge performance. The value stream map included only the current state, with no lead-time ladder or future state map. There was no value stream plan, so kaizen events were not tied into achieving the future state condition.

Misspent TAKT time. Although they constructed reasonably good manufacturing cells, the operators batched production and didn’t produce in a one-piece flow fashion. Operators were seated, which didn’t allow them to perform the required number of operations to consume their TAKT time.

Outdated standard work. Standard work combination sheets were posted in each cell. But the standard work was outdated; the original date (from one year prior) was crossed out and replaced with the current date. It was clear they hadn’t updated their standard work to reflect changes in TAKT time or kaizen improvements.

Overproduction. Each cell tracked production using day-by-the-hour boards. The previous day’s planned production units were 100, but the plant recorded an actual production quantity of 145 units. Management marked this figure in green to reflect a favorable condition.

When I asked why, the management team indicated they exceeded their production plan and stated, “We had a good day.” Now, every Lean practitioner is familiar with Lean’s “7 Wastes,” one of which is waste from overproduction. I explained that this excess production should have been marked in red, as an abnormal condition. If they were, in fact, properly using standard work, excess production would be virtually impossible (if operators were working to a properly calculated TAKT time).

This plant had been “doing” Lean for over a decade, but it’s clear they were not “being” Lean. They had all the markings of a Lean organization, and the corporate office was convinced they were doing an outstanding job in transforming the plant. Yet, this was far from reality.

What lessons can we learn?

Invest in Lean education. Senior leaders need to be educated in Lean methodologies and learn how to ask the right questions. In this case, the plant management had the best intentions, but they were poorly educated in Lean principles and truly believed they were doing a stellar job.

In their effort to improve key performance indicators (KPIs) to give corporate leaders a sense of progress, they violated several Lean principles. Corporate leaders would have exposed these dysfunctional behaviors had they been trained to look at their business through a pure Lean lens.

Benchmark to world-class standards. This particular plant only benchmarked to other plants within their global organization. Quite frankly, the plant’s management and employees didn’t have an understanding of “what good looks like.” It’s important to benchmark outside your organization—and even outside your industry—to truly understand what world-class benchmarks are.

Now it’s your turn to ask: Is your organization “doing” Lean, or is it “being” Lean?

Mark DeLuzio is a pioneer of Lean and the principal architect of the Danaher Business System (DBS). As a trusted advisor to global organizations, he helps leaders think differently about how to optimize enterprises systemwide. His new book is Flatlined: Why Lean Transformations Fail and What to Do About It. Learn more at markdeluzio.com and leanhorizons.com.