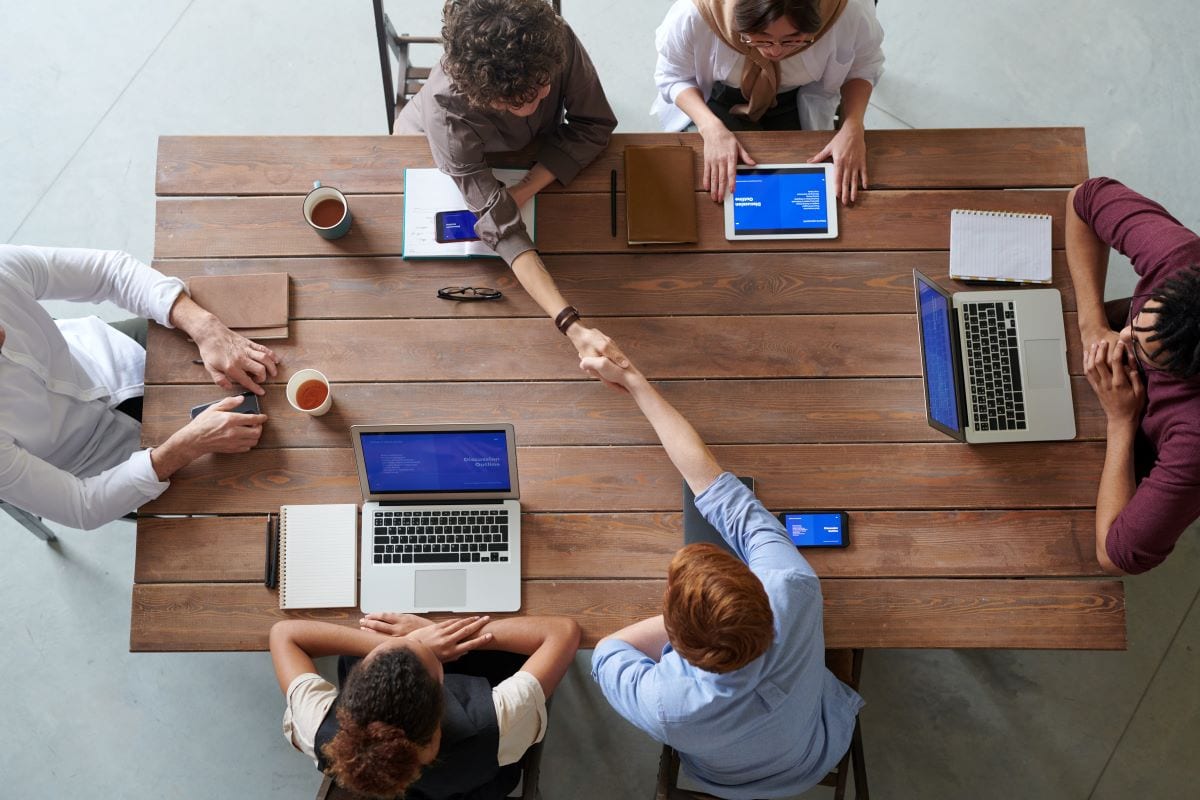 As a small operation or even individual, it can be that the corporate weight behind larger businesses you are competing with can seem extremely intimidating. This goes double if you’re not even involved in an industry but have something of worth to a particular business, and thus negotiations or offers are thrust upon you. It can sometimes be that larger businesses seek to completely override smaller operations or individuals via accumulated experts and monetary might.

We often see this in the tech industry, as giants like Google may undeniably valuable offers to innovative tech startups, not only to ingratiate them as part of their own services but also to help stifle competition outside of their own bounds. If having a deal such as this thrust upon you, it can be worth knowing how to hold your own and participate in the conversation to the degree that you both have something to say, offer and understand. This can allow both parties to move forward towards a competent and reliable result, and you’d be surprised just how effective this can be in the long term.

As far as this is concerned, we would recommend the following advice:

Holding your ground in negotiations is an important part of seeing just how valuable these discussions can become. Many times people are obligated to suggest they cannot dip further, or that this is their final offer. Provided you are firm to a reliable point, and do not over-ask or over-emphasize, you can often find wriggle room either side of this provided you are also willing to compromise. It’s a delicate art, but with extended conversation and a belief in yourself, you can get this right.

Utilizing services that help to negotiate on your behalf, or are willing to help you understand the value of that you’re sitting on can be absolutely vital to going into the discussions with care and consideration. For instance, selling a cell tower lease on land you own can be quite a complex discussion and you may not be well versed with all of the particulars, but with a company that understands how to negotiate and a company willing to provide you with an esteemed assessment of your potential, you may come through successfully.

Commit To Your Research

Commit to your research, looking for any angle that can help you establish a more comprehensive offering in order to gain what you may want. For instance, you may be at the potential mercy of an intensively attractive acquisition deal, something that you find hard to take given your family history in the company. It could be that you find this innovation is only truly understood by you, or you have value to this company, as do some of you team, that would be hard to artificially replicate elsewhere. This may help you stay on the team while also taking said deal, provided you can back this up with careful figures.

With this advice, we hope you can confidently negotiate with a much larger business going forward.

A Republican controlled House of Representatives, a Democrat controlled Senate and White House – a divided government. And if to make matters more complicated, the Republican Party itself is dominated by two very different groups; the first and larger being the Traditional Republicans and the second being the fiscally conservative Tea Party Republicans. Could ‘getting to yes’ be any more difficult?

The recent debt ceiling debate illustrated the vastly different philosophies of these three dominant groups within our government and revealed to us a fundamental negotiation rule – one that we often forget, one that we should be much more diligent in recognizing when negotiating ourselves. This rule: identify the other party’s best alternative to a negotiated agreement.

Common among all three parties was the desire to prevent the United States government from defaulting on its debt obligations. This particular desire was clearly a moot point. The Federal Government takes in approximately $200 billion per month, an amount far greater than that needed to service its debt. The only reason a default might have occurred would have been that the President and Treasury Secretary would have chose to pay out on the government’s other monthly expenditures ahead of the debt service. This was believed to be highly unlikely. Thus, none of the three parties needed to be truly concerned about a debt default.

The second objective of all three parties was the avoidance of a credit rating downgrade. This particular outcome was a real possibility and in hindsight actually occurred. At the time (prior to the actual downgrade), the threat of a credit downgrade forced all three parties to the negotiating table. However, how to deal with the threat of a downgrade was represented a vastly different position taken by all three groups. More to come on this point in a moment…

The third common outcome desired by all the parties was for the United States Government to meet its financial obligations to military service members, veterans, and the elderly by way of making compensation, benefits, and social security payments. Once again, the United States Government receives enough monthly tax revenues to meet these and its debt service obligations making this another moot point.

The fourth belief shared by the three parties is that an expanding economy is the ultimate solution for increasing government tax revenues and more closely balancing the government’s income with its expenditures. How to achieve this economic growth is the key difference between the parties and forms the basis of the debt ceiling negotiations.

The Democrats: The Democrat Party, in general, believes that government intervention is required to grow the economy, to create jobs. Their focus is on job creation through the building of new and refurbishment of existing infrastructures. Furthermore, Democrats believe that by providing funds to the less fortunate, that these individuals will more greatly participate in the marketplace which in-turn will foster greater economic activity and growth. Democrats feel that given the depressed economy, those millionaires and billionaires – defined as individuals earning wages more than $200,000 or married couples earning more than $250,000 per year – should pay more in taxes to enable their prescribed government spending. This increase in tax revenue derived from this group would be achieved through the elimination of existing tax deductions and an increase in these individuals’ tax rate. Lastly, Democrats wish to heighten marketplace regulation to ‘protect’ their defined middle and low income wage earners.

The Republicans: The Republican Party, likewise, want to grow the economy. However, they believe that taxation and marketplace regulation should be reduced in order to lower the burdens and risks presented to business owners that will, in theory, spark increased economic activity and growth. Furthermore, Republicans believe in lower individual taxes as a mechanism for enabling citizens to retain more of their income which would then be spent within the marketplace and bolster economic activity. They believe that this reduction in government tax revenues should be offset by some modest reductions in Federally funded programs and the restructuring of others. Republicans are not calling for an immediate balancing of the Federal Government’s budget but rather believe their deficit spending will eventually be offset by the increased revenues received from a growing economy some number of years in the future.

The Tea Party: The Tea Party, in principle, shares economic philosophy of the Republicans. The difference, however, is that Tea Party members believe that the government should live within its means now, not many years into the future. Subsequently, the Tea Party wants to cut government spending, primarily through institutional downsizing, to a far greater extent than Traditional Republicans. They believe economic growth is best achieved through a balanced government budget in the immediate-term, not with the promise of a balanced budget some years out.

Considering the desired results of the three parties negotiating over the debt ceiling increase, we can see that there is, in fact, a lot these groups have in common. The negotiations, therefore, center on the approach to achieving these goals.

Now, let’s examine the best alternative to a negotiated settlement. If the parties did not come together on a compromise position that would garner enough votes to pass in both the House and the Senate as well as receiving the President’s signature, the Federal Government would hit its debt ceiling and have its spending limited to that equal to its monthly tax revenues. This would force the government to prioritize its spending and essentially achieve a balanced budget. Additionally, we find that the government could cover all of the commonly desired program funding, namely the service of debt, payment of military salaries, provision of veterans’ benefits, and issuing of Social Security checks. Therefore, all of the commonly desired could be met leaving only the approach to be negotiated.

Considering the desired approach of the three negotiating parties, we find that the Tea Party’s demands in this area would have also been satisfied with Traditional Republicans being partially satisfied and Democrats receiving none of what they desired. Thus, the best alternative to a negotiated solution met the Tea Party members’ demands enabling them to firmly resist any solution not in line with their wishes. This made the Tea Party the most powerful, if not the smallest in number, negotiator at the table. Likewise, Traditional Republicans, the second smallest group, was in a more powerful position than the Democrats who held the greatest control over the Federal Government.

This best alternative to a negotiated solution example highlights the power held by each party and helps explain why the negotiations ended as they did… with no tax increases and an equal value in budget cuts to the amount of debt ceiling increase. It also illustrates several practices StrategyDriven leaders should take when negotiating with other parties:

For additional information on determining the best alternative to a negotiated solution and other negotiation best practices, StrategyDriven Contributors recommend Getting to Yes: Negotiating Agreement Without Giving In